Can 'Heavy Rain' live up to its grand intent? 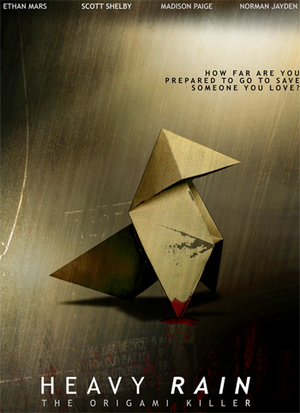 From the moment of its introduction at E3 2006, Quantic Dream’s Heavy Rain promised an experience games have never truly managed: Narrative at the fore, with gameplay built around a story rather than a story that’s wedged into the gameplay. Now that it’s out, it’s clear that Quantic Dream CEO David Cage has man­aged to harness the participatory nature of games to create some emotionally jarring scenes. Yet even so, Heavy Rain’s illusion of choice and consequence will not hold up for a seasoned gamer.

The story provides some tense and sometimes frightening moments. I agonized over two de­cisions that were required of me, going so far as to pause the game and ask friends and family what the best decision would be. Some action scenes almost make you feel like your life is actually in danger. And while video game morality is usually just a masquerade—choices that seem moral are really more about raising your “good” or “evil” stats—some of Heavy Rain’s choices offer real moral dilemmas. At the game’s best, these choices can considerably alter your experience. And the changes can be so seamless, you probably won't notice that the game could have played out in numerous different ways.

Continue reading "Can 'Heavy Rain' live up to its grand intent?" »