'The Art of Immersion': Now in Korean 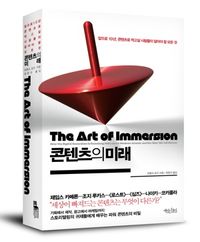 W. W. Norton is publishing The Art of Immersion worldwide in English, but the first foreign-language edition is being published by the Korea Price Information Company. As the book's translator, Wankyu Choi, just posted on his blog, the Korean edition is now going on sale in online bookstores there.

The cover is very Inception, inspired by the spinning top that the Leonardo DiCaprio character uses to keep track of what state he's in. You know the drill: If he's in the real world, the top will sooner or later fall over, as tops do. But if he's in a dream state, it will keep spinning indefinitely. In the final scene of the movie [spoiler alert!], the top famously starts to wobble, but the picture ends before we can be sure. This top looks a little wobbly too, which I suppose could be taken as a question about my own mental state as I was writing the book. Did I dream the whole thing? No comment, I'm afraid.