« Then and now: The legacy of Steve Jobs | Main | Peter Weyland of "Prometheus" makes a surprise appearance at TED: 'Allow me to introduce myself.' »

An elfin figure with a shaved head and suspiciously pointy ears, Coulson worked at McCann Erickson, JWT, and crayon before being named creative director of the New York marketing agency Campfire in 2009. At Campfire he's led projects for such clients as A&E, the Discovery Channel, and Snapple in addition to HBO. He began planning the Game of Thrones experience in summer 2010, months before the February 2011 premiere of the series. At last week's meetup, he focused on what he and his team did and—just as importantly—didn't do, while tossing out the occasional lesson to be gleaned from their experience. I'm going to emphasize the lessons.

The first task was to try to reduce the story to its essence—no small task for a series with 19 main characters and dozens of supporting characters from seven royal and noble families and a half-dozen other groups. He managed to get it down to "the power struggles and secret liaisons of dynastic families vying for control of a mythical kingdom"—not quite as pithy as "The Sopranos in Middle Earth," which is how one of the screenwriters described it, but still not bad.

Unfortunately, this formulation led to some not-so-great solutions. Maybe they should create a social game in which players have to decide which friends to keep and which to betray? Or a game that would pit real families against other real families? Okay, maybe not. What if they explored the themes of the saga by re-imagining the seven families as luxury fashion brands? Well, not unless they wanted to do something that only made sense to serious fans of the books—and probably not even to them.

Eventually they decided to focus not on the families but on the mythical kingdom the families were vying to control—a decision Coulson described as moving them from storytelling to world-building. To evoke this world, they hit upon the idea of appealing to the five senses—smell, sound, sight, touch, and taste. Using the senses, they could conjure up a memory of a place people had never actually been to.

So they decided to introduce a new sense each week. But this led to other problems, starting with how to convey scent on the Internet. The couldn't, of course. Instead, they turned to a real-world experience: They would make up scent boxes promising, as HBO put it in an accompanying letter, "an immersive experience of the land of Westeros," where Game of Thrones is set. The boxes would go to a small number of influencers—bloggers, reporters, George Martin fans, and the like. "Open the boxes and there's a whole world inside," Coulson told us—parchments, glass vials, and six different scents with instructions on how to combine them. "Mix them together and you'd get the smells of Westeros." As one reader commented somewhat irreverently on a Game of Thrones site, "Awesome! I bet that’ll go for a lot on eBay." Which brings us to the first lesson of the Game of Thrones experience: 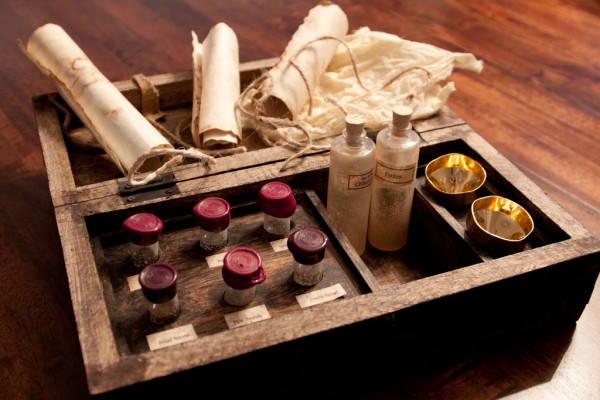 The Game of Thrones Scent Box

But what should the box look like? The first iteration was a beautifully designed and built of wood and brass. It was gorgeous. It was also far too bright and shiny to be believable. So they blackened it and roughed it up and ended with something that looked almost as if it might actually be an artifact of a vanished civilization. In fact, of course, it was just a cleverly designed fake. But that's the point: Making things seem like what they aren't. Coulson likened it to art forgery. I'd just call it showbiz.

For sound, the Campfire team went back to the Web, creating a binaural soundscape—essentially, a 3-D sound effect in your head—of the Inn at the Crossroads, a popular gathering spot for the common folk of Westeros. You reached it through The Maester's Path, a site set up to engage hardcore fans by introducing a puzzle element to each of the five sensory experiences. Listening to the soundscape in the inn, for example, you could overhear various conversations. Embedded within them were clues that would enable you to solve the sound puzzle. 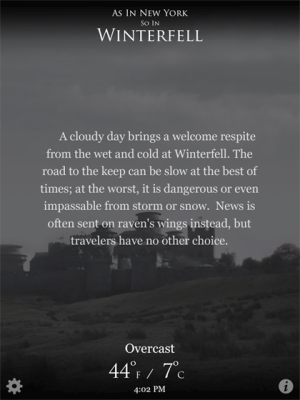 The sight element was challenging, not because it's hard to do online but because it's done all the time. How to make this one different? By creating a digital version of the Wall, the 700-foot-high wall of ice that shields the seven kingdoms from the wildings that inhabit the far north. Walking the Wall on your computer screen, you encountered soldiers who would tell you how it was built and why.

And then there was touch. The touch element, Coulson said, "started to unlock for us when we thought of 'feel' rather than 'touch.' How do things feel to you?" That led to the idea of creating a mobile app that would describe the weather where you are in terms of the weather on some part of Westeros. "A climate-driven storytelling experience," Coulson called it. "We had fun with that phrase. But it started to unlock something in our head"—because once they started thinking about of the weather app as a way to tell a story about life on Westeros, that helped them define what the app should be. Fans loved it.

Lesson #3: If you define an experience as a story, you will find the story in the experience.

Of course, just because you're telling a story doesn't mean you're in control of it—especially if what you're really trying to do is set out building blocks and let the audience tell the story. This became apparent early on, when Winter Is Coming, a fan blog that sprang up around the time HBO green-lit the pilot episode for the series, received a scent box. Not content with mixing scents and reading scrolls, the Winter Is Coming blogger went searching for hidden clues. After hours of searching, he found what appeared to be some very faint lettering on the back of a map of Westeros that had come in the box. He couldn't make out what it said, so he posted it on the site—where it was seen by a reader who ran it through some Photoshop filters and reported that it read, ALWAYS SUPPORT THE BOTTOM.

A flurry of speculation ensued. Hours of careful examination proved that the box had no secret compartment on the bottom, nor was there anything on the bottom of the vials. Meanwhile, the people at Campfire were as mystified as the fans. Finally Coulson tweeted that "Support the Bottom" was not a clue. "Bummer," the blog declared. It was just an error, apparently caused by putting the liquid used to artificially age the scrolls in a container that had that stamped on its bottom. "The common theory," Winter Is Coming reported later, "is that my map was on the bottom of the pile of maps placed into this container to soak, and because of that the raised lettering on the bottom of the pan lightly transferred onto the back of my map."

But the mystery did not stop with the revelation that it was actually a mistake. By this time, Winter Is Coming had kicked up so much speculation that fans were loathe to let it go. "Always Support the Bottom" became the blog's in-house motto, a symbol of fan fanaticism. Eventually Campfire incorporated the phrase into one of its puzzles. Like the four-toed statue on Lost, "Always Support the Bottom" was making the transition from bug to feature. Winter Is Coming even started selling T-shirts with the phrase emblazoned on the chest.

The Always Support the Bottom T-shirt

The great thing about "Always Support the Bottom," aside from its serendipitous discovery, is that it was subject to any number of different interpretations. "'Supporting the bottom,'" Winter Is Coming declared, "has come to denote anyone who does something to assist the fandom (getting set photos, asking Martin a burning question at a book signing, etc.). Our loyal readers may be called 'bottom supporters.'" Campfire viewed "Always Support the Bottom" from a different perspective. "No community is too small to take note of," Coulson declared at last week's meetup. "You want to make sure they know you're listening."

As for the Game of Thrones TV show, it returns to HBO on April 1 in the US, April 2 in the UK. Will The Maester's Path be coming back as well? Coulson was somewhat coy in his response. "I can't say," he said. "But the second season is always about getting new fans."