« SocialSamba's Aaron Williams on Hashtag Killer and why you might want to friend those guys on 'Psych' | Main | The Colbert Super PAC: Magic happens! »

Organized by Charlie Melcher of Melcher Media, the innovative publisher behind Al Gore's Our Choice, the one-day conference began with a chartered ferry ride from lower Manhattan past the Statue of Liberty to the north shore of Staten Island. There, on the bucolic grounds of Sailors Snug Harbor, a 19th-century home for retired mariners that's been redeveloped as a cultural center, a variety of scenarios for storytelling's future unfolded.

The day was organized around a series of workshops and roundtable discussions led by such people as Damian Kulash of OK Go, Heroes creator Tim Kring, Ian Schafer of the digital agency Deep Focus, and Google's Aaron Koblin, the man behind the pioneering interactive video The Wilderness Downtown. But first we all gathered in Snug Harbor's 1892 Music Hall for a welcome from Charlie and a few talks—the last of which, by Kris Hammond of the digital storytelling startup Narrative Science, posited that stories in the future will be told by bots. 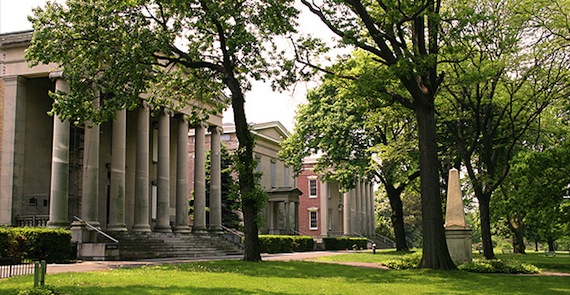 Snug Harbor, site of the Future of Storytelling conference.

For a tech-savvy group assembled to hash out the future of the most human of activities, this was guaranteed to generate cognitive dissonance. Hammond, a computer scien­tist at Northwestern, pressed his advantage by demoing his software's sportswriting talents. As if by magic he transformed a table of game statistics into a bot-written hockey story, complete with dramatic lede. He explained that Quill, his storytelling program, turns stats into stories by performing data analysis and applying a journalistic view of what's important. The problem was that Quill never got beyond the stats. Good sports stories are detailed and specific tales of human struggle and endurance, and this was basically just a slick game wrap-up. Quill would have to do better if it wanted to be seen as more than a parlor trick.

It did get better, or at least more convincing. Narrative Science ("We Transform Data into Stories and Insight™") has recently turned its attention to more promising data dumps, such as financial results and real-estate deals. It takes time and expertise for humans to glean the import of this kind of stuff, and too many of us lack either. More promising still was a Quill-penned student test-score report, which didn't just highlight weaknesses but made specific suggestions for improvement. This, as Hammond pointed out, was a story written for an audience of one (actually three, counting the parents)—"and kids in even the best schools don't get this level of feedback."

Future #2: Humans will do it, unmediated by technology.

In a clever bit of programming, Hammond and his data-chewing storybot were preceded by their exact opposite: Ophira Eisenberg of The Moth, New York's nonprofit storytelling forum. The Moth operates in a variety of media—radio, podcasts, etc.—but its focus is on storytelling the old-fashioned way: on a stage, in front of other people, with nothing but a mike. It's the campfire approach, minus the campfire. In the hands of someone like Eisenberg, who told us about once being introduced in Texas as "Oprah Something-Jewish," that comes out as TED-meets-standup.

Eisenberg presented first one and then another of The Moth's more accomplished storytellers. Onstage with them was Damian Kulash, who looked on with rapt attention while awaiting his assigned task—to strum his guitar if a speaker went on too long. One of those speakers was George Lombardi, an infectious-disease specialist whose tale of being summoned to India to treat Mother Teresa was a marvel of craft, content, and delivery. But I found myself more affected by Faye Lane, a woman with bright blonde hair who talked about being a flight attendant.

Actually, Lane started out talking about storytelling. (The whole conference was very meta.) "What a storyteller does—a good one—is take a group of individuals and, through a shared emotional experience, turn it into a collective," she said. Then she went into her own story, which involved becoming a flight attendant for an airline that hired people, according to the CEO, because of their ability to smile and be kind—which dovetailed neatly with her idea of the job.

All went well in training. But once she actually had to deal with customers, it got tougher. On one flight, a woman buzzed impatiently for more water as the flight attendants were trying to treat a heart-attack victim laid out in the aisle by her seat. On another, in the fall of 2001, a man boarded with a black plastic garbage bag—he couldn't afford a carry-on?—and stuffed it into an overhead bin. Then this same man violated another taboo—the one against standing in the aisle while the fasten-seat-belt sign was on.

Still, she had resolved to smile and be kind. So as he stood next to her waiting for the restroom, she smiled and asked if he was traveling for business or pleasure. Neither, he replied. His son had been a first responder on 9/11—and the uniform in that garbage bag was all he had left of him.

In both cases, the important thing was to connect. But how do you do that?

The real message: Either way, it's the white space that matters.

In the Music Hall that morning, as in the video above, Charlie talked about the importance of the white space between words—a convention that was lost during the Middle Ages. "You couldn't really think about what you were reading when you were decoding those words," he says in the video. "But with the invention of white spaces, people could read quickly, and silently, and with that they could start to have thought. And so I had this epiphany: Maybe that's exactly where we are right now. We're in the early stage of our digital literacy where we're still kind of struggling, and we haven't figured out the metaphorical white spaces of the digital age."

It's a powerful idea, and one that kept recurring in different forms throughout the day. Christopher Graves, global CEO of Ogilvy & Mather PR, ran a workshop I attended called "How To Craft Stories that Grab People by the Brain." The answer: By telling stories that appeal to the emotions—because they are specific, they are concrete, and they contain unnecessary details that serve to engage the imagination. Because, in other words, they leave white spaces that your listeners or readers or viewers can slip into as they imagine themselves in your story.

And what about the role of the people formerly known as the audience as storytelling becomes participatory—how do you make room for that? With white spaces. Lance Weiler, the indie filmmaker turned storyworld pioneer, led a roundtable discussion in which he talked about finding "places where I leave room for the mystery, the questions. It is about the beauty of the spaces." As I jotted down his words, I turned that phrase around in my mind: "the beauty of the spaces." It's what the storybot lacked in its account of the hockey match. It's what The Moth speaker provided in her tale of the passenger with his black plastic bag. It's something we all have to remember, no matter where technology carries us.