Henry Jenkins on 'Spreadable Media,' why fans rule, and why 'The Walking Dead' lives

"If it doesn't spread, it's dead": With this pithy dictum, Henry Jenkins summed up the nature of media distribution in the Internet age. Introduced as "our new mantra" in a 2007 blog post about Jonathan Lethem and slash fiction, it turned up again as the title of a 2008 white paper from the Convergence Culture Consortium, the initiative Henry launched at MIT to explore the changing dynamics of the media industry. Now it's the central idea that animates Spreadable Media, the new book he's written with Sam Ford and Joshua Green, two former C3 colleagues who have moved on to consultancy roles — Sam at Peppercomm Strategic Communications, Joshua at Undercurrent. In whatever context, this idea stands as a corrective to the distribution model of the broadcast era, which presumes that control will rest with whoever puts the product out, not with the people who are the market for it. The levers of power have shifted. 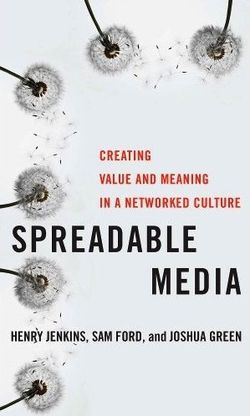 Due out next week from NYU Press, Spreadable Media is an essential read for anyone who wants to under­stand how media works today. The book begins by contrasting spread­­ability with sticki­ness, an earlier measure of online appeal that prevailed during the heyday of "Web portals" like AOL and Yahoo! Sticki­­ness was a Web 1.0 concept that tried to port ideas from the broad­cast indus­try into the Web world — ideas like cen­tralization and pull and pre-structured inter­­activity, as opposed to dis­persal and flow and open-ended participation. But the au­thors take issue with Web 2.0 as well, and they seem border­line ap­palled by the "viral" metaphor that has attached itself to the act of online sharing. Participation, they argue, is not a dis­ease, and should not be treated like one. To do so is to denigrate not just the act but the peo­ple who doing it — that is, us.

Henry and I have known each other for sev­eral years—I've spoken to his class at USC, and he interviewed me when The Art of Immersion came out. So with Spreadable Media now available for pre-order, I was eager to return the favor. Here's part one of our email exchange:

When you coined the phrase "participatory culture" in 1992, did you have any idea how participatory it would get?

I never would have imagined it, to be honest. My understanding of the concept has deepened over time. In 1992, I used "participatory culture" as the subtitle of my book, Textual Poachers, which just came out in a 20th anniversary edition. I was trying to set up a basic contrast between the ways that mass media had created a spectator culture and the ways that fandom was asserting a collective and individual right to par­ticipate within media culture, often through the production of new kinds of works — fan fiction primarily, but also fan music and fan video — from the raw materials that the culture industry provided. My thinking at the time was informed by writers like Seymour Papert, who had described the forms of cultural participation which had grown up around the Samba Schools in Brazil, but my thinking lacked much cultural scope or depth.

Continue reading "Henry Jenkins on 'Spreadable Media,' why fans rule, and why 'The Walking Dead' lives" »