From 'Oliver Twist' to 'Game of Thrones': Six serials and how they've deepened the art of storytelling

For a couple of years now, “transmedia” has been the buzzword most people use to define story­telling in the digital age. But while telling a story across different media formats (video, text, game, what have you) can be an effective way to engage people in a narrative, it's not the only way—nor is it necessarily the best. One of the most effective means of creating an immersive narrative is in fact one of the oldest: by serializing it.

I was reminded of this recently when I went to Turin to speak at the Scuola Holden, a “school of storytelling and the performing arts” founded 20 years ago by the novelist Alessandro Baricco. Named after that world-class narrator Holden Caulfield, this unconventional institution (no teachers, for a long time no tests, and certainly no phonies) was intended to be a place where young Caulfield might feel at ease. Instead of hiring professors, the school brings in professional storytellers; and instead of focusing on technical skills like journalism or filmmaking, it tries to foster an aptitude for telling stories in any medium. 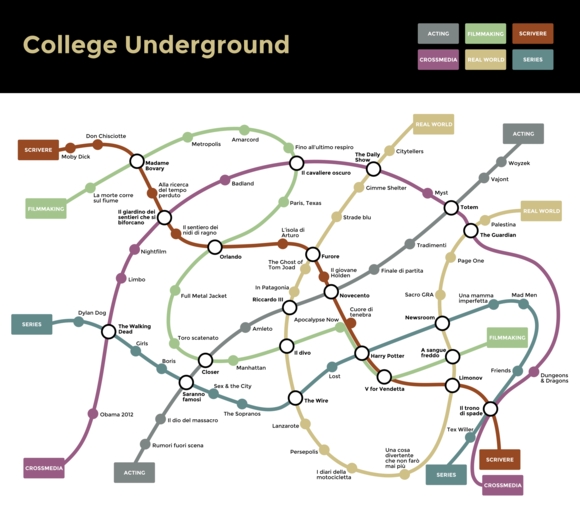 Nonetheless, students are expected to spend about half their time during the two-year program in one of six “colleges”: Scrivere (writing), Filmmaking, Series, Crossmedia, Acting, and “Real World”—that is, stories inspired by actual events. In the first month of the school year, people like me were brought in to describe what these different disciplines were all about. I was asked to talk about Series. Then I was handed this map, which I decided to redraw a bit. The point was to show how serialization can create a sense of immersion.

Continue reading "From 'Oliver Twist' to 'Game of Thrones': Six serials and how they've deepened the art of storytelling" »