A year ago I wrote about the newly re-imagined Cooper Hewitt, the Smithsonian's design museum in New York, for my friend Betsy Pochoda, editor of The Magazine Antiques. Cooper Hewitt set out to reinvent itself as a center for highly participatory and deeply immersive experiences, not the musty storehouse of old stuff that design museums generally seem in danger of becoming. It even has an "immersion room" where visitors can use a digital projector to see what its wallpaper samples would look like on the walls. Now it's about to mount a show called "Thom Browne Selects," an "immersive environment" guest-curated by the fashion designer best known for gray flannel suits that stop well above the ankle. So when The New York Times asked me to interview him over the holidays for a piece on the show, I jumped at the chance. 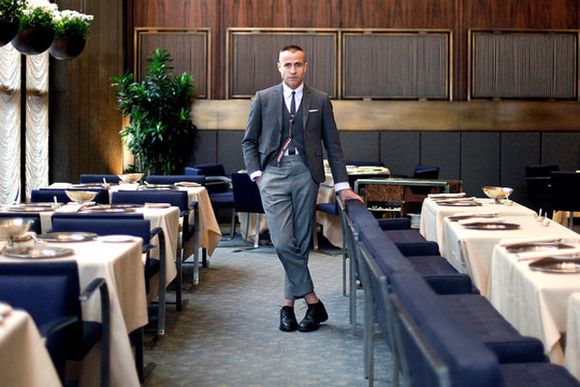 Thom Browne at his favorite lunch spot: The Four Seasons restaurant in Manhattan.